Please confirm that you are not located inside the Russian Federation

Yes No
Leave this Site?

The link you have selected will take you to a third-party website. We do not control or have responsibility for the content of any third-party site.

Mouth-to-Mouth Breathing for an Adult or Child 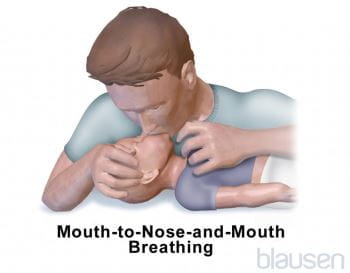 Mouth-to-Nose-and-Mouth Breathing in an Infant

Opening an Airway in an Adult or Child

Doing Chest Compressions in an Adult

Doing Chest Compressions in an Infant

CPR: How Effective Is It Really?

Cardiac arrest is when the heart stops pumping blood and oxygen to the brain and other organs and tissues. Sometimes a person can be revived after cardiac arrest, particularly if treatment is started immediately. However, the more time that passes without oxygen-containing blood being pumped to the brain, the less likely it is that the person can be revived, and, if revived, the more likely it is that the person will have brain damage.

Cardiac arrest can be caused by anything that makes the heart stop beating. One common cause, especially in adults, is an abnormal heart rhythm Overview of Abnormal Heart Rhythms Abnormal heart rhythms (arrhythmias) are sequences of heartbeats that are irregular, too fast, too slow, or conducted via an abnormal electrical pathway through the heart. Heart disorders are... read more

(arrhythmia). Another possible cause is stopping breathing, such as when a person drowns or has a severe lung infection or severe asthma attack.

A person in cardiac arrest lies motionless and does not respond to questions or to stimulation, such as shaking. The person may not be breathing or may have gasping, irregular breaths called agonal breathing.

The crucial steps that should be done to maximize a person's chance of survival are called the cardiac arrest chain of survival Out-of-Hospital Chain of Survival Cardiac arrest is when the heart stops pumping blood and oxygen to the brain and other organs and tissues. Sometimes a person can be revived after cardiac arrest, particularly if treatment is... read more

. The survival chain begins with bystander recognition of cardiac arrest and continues through calling for emergency services, providing cardiopulmonary resuscitation (CPR) and defibrillation when available, and giving high-quality post-arrest care in a hospital. Without successful accomplishment of each of these steps, it is unlikely that a person will survive.

Recognition and treatment of cardiac arrest should ideally occur at virtually the same time. A rescuer who finds someone unconscious should first determine if the person is unresponsive by shaking the person and loudly asking, "Are you okay?" If there is no response, the rescuer should turn the person's body face up and look to determine whether breathing has also stopped or is not normal.

If the person does not respond to stimulation and is not breathing or is breathing abnormally (for example, gasping), emergency resuscitation with CPR is begun and the local emergency medical service is called (in the US, calling 911). Rescuers should not try to check for a pulse but should start CPR as soon as possible because the risk of doing chest compressions on a person not in cardiac arrest is much lower than the risk of not doing chest compressions when needed.

CPR should be started immediately by one rescuer, while a second rescuer contacts emergency services and retrieves an automated external defibrillator (AED) if available. CPR should not be delayed while the AED is retrieved, and the AED may be used as soon as it is available. Some emergency services dispatchers provide telephone instructions to help direct care, including giving instruction in how to do compression-only CPR Compression-only CPR Cardiac arrest is when the heart stops pumping blood and oxygen to the brain and other organs and tissues. Sometimes a person can be revived after cardiac arrest, particularly if treatment is... read more

An AED can rapidly determine whether the person has an abnormal heart rhythm that can be treated by an electric shock (called defibrillation). If the AED detects an abnormal rhythm that could be corrected, it delivers a shock, which may start the heart beating again. AEDs are easy to use and are available in many public gathering places. Written instructions for use are available on each AED and should be followed. Most modern AEDs also provide voice prompts on how to use the AED. The American Red Cross, American Heart Association, and several other organizations provide training on CPR and the use of AEDs.

There are two CPR methods:

Studies have shown that compressions-only CPR is as effective as standard CPR for adolescents and adults in the first few minutes of cardiac arrest. Standard CPR may be more effective for children and infants, and for people whose cardiac arrest is due to respiratory causes, but only if the rescuer has been trained.

CPR: How Effective Is It Really?

Standard CPR combines rescue breathing (mouth-to-mouth resuscitation to supply oxygen to the lungs) with chest compressions that force oxygen-containing blood out of the heart to the brain and other vital organs.

The sequence of CPR begins with 30 chest compressions, followed by 2 rescue breaths, and continues in a ratio of 30:2 until the rescuer is relieved by emergency personnel. Chest compressions can quickly tire a person, resulting in compressions that are too weak to circulate blood effectively. Thus, if two or more rescuers are present, they should switch every 2 minutes, or sooner if the rescuer performing compressions begins to feel tired.

To do chest compressions in an adult or child, the rescuer lays the person face up, rolling the head, body, and limbs at the same time. The rescuer extends his or her arms and "locks" them straight at the elbows, leans over the person, and places both hands, one on top of the other, in the center of the chest (between the nipples on the breastbone). The rescuer then compresses the chest to a depth of at least 2 inches (5 centimeters) in adults. In children, the rescuer compresses the chest about 2 inches (5 centimeters), and may need to use only one hand to compress in a smaller child. For an infant (up to 1 year old), the rescuer may use two fingers to compress the infant's breastbone just below the nipples to a depth of about 1½ inches (about 4 centimeters) or ⅓ the diameter of the chest. Alternatively, trained rescuers may choose to encircle the infant's chest with two hands and do compressions with their thumbs.

Opening an Airway in an Adult or Child

To do rescue breaths, the rescuer first looks in the mouth and throat for any visible objects that may be blocking the airway and, if any are present, removes them. The rescuer then opens the airway by tilting the person's head and lifting the chin (see figure Opening an Airway in an Adult Opening an Airway in an Adult or Child Cardiac arrest is when the heart stops pumping blood and oxygen to the brain and other organs and tissues. Sometimes a person can be revived after cardiac arrest, particularly if treatment is... read more

Standard CPR can be done by one person (a single person alternately does rescue breaths and chest compressions) or by two people (one to do rescue breaths and one to do chest compressions). In standard CPR, a single rescuer gives 30 compressions and then two breaths. If two rescuers are present, when children or infants need CPR, a ratio of 15:2 is preferred, whereas in newborns, a rate of 3:1 is recommended. Compressions are done at a rate of 100 to 120 times per minute in people of all ages. CPR is continued until medical assistance arrives or the person recovers.

Compression-only (sometimes called hands-only) CPR involves giving continuous chest compressions without rescue breathing. Compression-only CPR is recommended when the rescuer does not have training in standard CPR or is unable or unwilling to do rescue breathing. For infants, children, and people in whom the cause of cardiac arrest seems to be from stopping breathing, such as those who have drowned, standard CPR with rescue breaths is preferred. However, if rescuers are unwilling or unable to do artificial respiration, they should still do compression-only CPR even on people who are thought to have cardiac arrest due to a problem with breathing.

Doing Chest Compressions in an Adult

Doing Chest Compressions in an Infant

The following are some English-language resources that may be useful. Please note that THE MANUAL is not responsible for the content of these resources.

Was This Page Helpful?

MSD and the MSD Manuals

Merck and Co., Inc., Kenilworth, NJ, USA (known as MSD outside of the US and Canada) is a global healthcare leader working to help the world be well. From developing new therapies that treat and prevent disease to helping people in need, we are committed to improving health and well-being around the world.  The Manual was first published in 1899 as a service to the community. The legacy of this great resource continues as the MSD Manual outside of the United States and Canada. Learn more about our commitment to Global Medical Knowledge.

This site complies with the HONcode standard for trustworthy health information:
verify here.